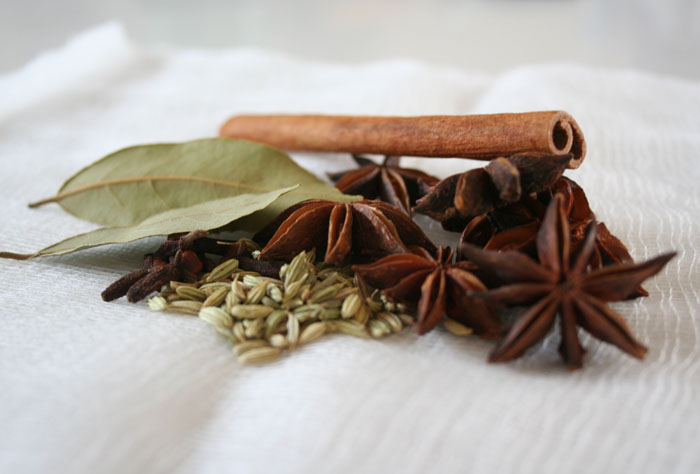 I love making this soup in the winter.  It is the ideal comfort food for me.  I will add a picture of a bowl of soup as soon as I can.  I forgot to take one the last time I made this soup.  I got this recipe from foodtv.com…be sure to give the onions and ginger a nice char as it really adds flavor and color to the soup.
Beef Pho (Vietname Beef & Rice Noodle Soup)

Put the oxtails into a large stockpot and add enough water to cover the bones by 2 inches (about 1.5 gallons). Bring to a full boil and then lower the heat to a rapid simmer. Skim the scum that rises to the surface.

Meanwhile put the ginger and onion halves on a baking sheet and char them under the broiler until lightly blackened, 10 to 15 minutes. Turn them over halfway through cooking. When cool enough to handle, rinse the onion and ginger under running water, using a knife to scrape away some of the charred surface. Cut the ginger into 3 pieces and toss it and the onion halves into the simmering broth, along with 1 tablespoon salt and the fish sauce.

Put the star anise, cloves, and cinnamon stick in a small skillet and toast them on top of a stove burner over medium heat. Turn the spices a couple of times until they’re slightly darkened (3 to 4 minutes) and until you smell their aroma. Put the toasted spices and fennel seeds in a small square of double thick cheesecloth and tie the bundle with a long piece of kitchen twine. Add the spice bundle and the bay leaves to the broth, tying the end of the twine to the pot handle for easy retrieval.

Let the broth simmer, uncovered, skimming occasionally. After 4 hours, remove the spice bundle, onion, bay leaves and ginger from the pot and discard. Remove the oxtails from the pot and set aside. Let the broth continue to simmer. When the meat is cool enough to handle, pull the meat from the bones. Set the meat aside and return the bones and the daikon chunks to the broth. Continue simmering, uncovered, until the broth is rich and flavorful, about 1-2 hours. Taste the broth and add more salt or fish sauce as needed.

Bring a large pot of water to a boil and add the drained rice noodles. Give the noodles a quick stir and cook until tender but firm, about 1 minute. Rice noodles can quickly become gummy, so don’t let them overcook. Drain the noodles. Warm 6 large bowls by rinsing them with hot water and divide the noodles among the bowls.

Just before serving, return the broth to a full boil. Arrange the slices of raw filet and pieces of cooked oxtail meat over the noodles in each bowl. Carefully ladle the boiling broth over all; the raw beef should be submerged in the broth. Serve immediately, along with the platters of garnish.